One day, Cass Forkin was eating at a diner and noticed three elderly women trying to piece together enough change to pay for their meal. Moved, she told the server she wanted to anonymously pay for their lunch. After pressuring the server to name who had been so generous, the three women approached Forkin with tears in their eyes. Expressing their gratitude, they told her they didn’t know there were people like her left in the world.

Forkin couldn’t get the memory of those ladies out of her head. She began to wonder what more she could do to help the seniors in our communities. She went on to become the bedrock of Twilight Wish Foundation, the first and premier national wish-granting organization dedicated to the elderly, which officially launched in 2003. Since then, the charity has waved its magic wand and granted more than 1,650 wishes.

“We have seniors out there that, through no fault of their own, maybe they’ve had one lifelong wish they have wanted to have fulfilled that they have never been able to make come true because of lack of resources … All sorts of extraneous events happen and things have occurred so they have not been able to fulfill their wish,” Elinor Foltz, president of Twilight Wish, said.

The premise is simple: Find low-income senior citizens and fulfill their wishes and dreams. The requirements are likewise simple. Wish seekers must be 68 and older, US citizens, have financial need (200 percent or below the poverty line) and have a history of giving back to others. Through these wish-granting celebrations, little by little, the charity hopes to make the world a nicer place to age.

The wishes can be virtually anything the seniors desire and do not have to be last wishes, as long as the wish recipient is cognitively, emotionally and physically able to experience the wish.

“A lot of times, (our elders) are just forgotten,” Foltz said. “Twilight Wish honors and acknowledges seniors for all they have given to others by bringing comfort and joy into their lives through individual wish-granting celebrations … By treating the elderly with compassion, we restore their dignity and bring them hope.”

Large-scale wishes could be Margarette Kirsch’s dream of traveling the United States in a tractor trailer, Vietnam veteran Bobbie Joe Flater’s aspiration to ride in a fighter jet or Percy’s hope to meet celebrity Vanna White. Other desires are more modest, such as a nursing home resident’s wish to receive a visit from a golden retriever, or another resident’s dream of a computer screen magnifier so she could email her family.

“Granting wishes for senior citizens validates their self-worth and contribution to society over the course of their lifetimes. It also brings great joy to both the wish recipient and the wish granter … There’s the butterfly effect of granting a twilight wish. It just spreads hope and inspiration to so many people who are involved. It’s not just the wish recipient. It’s the caregiver, the family, the friends, and those who read the poignant wish stories. It’s almost like a domino effect,” Foltz described.

Life as a low-income senior, as with anyone on a limited budget, is tough. With only so much money that can only be stretched so far, life often comes down to difficult choices.

While wishes can be as big or creative as the senior can imagine, Foltz reports an increasing trend of wishes for basic needs rather than fulfilling a lifelong dream.

“Whereas we used to see a lot of great big ‘celebrating living life to the largest’ wishes, now we are seeing with this economy seniors with fixed incomes have been hit especially hard. So they are cutting back on necessities such as food and health care and medications … They’re asking for more humble things now,” Foltz said.

The new most-requested wishes have become dentures, hearing aids and power lift chairs. Instead of an experience, seniors want to be able to wash their clothes in a washer or fix their stove. Foltz reports that whether the wish is grandiose or simple, the organization is ready to fulfill whatever it can. 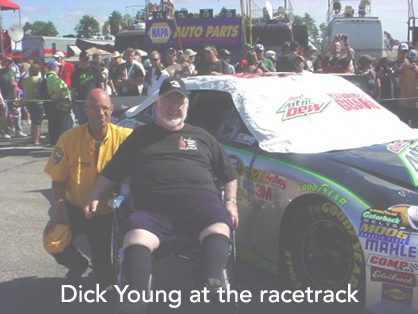 For Dick Young, the Twilight Wish Foundation granted his ultimate desire. It is hard for Young to be confined to a wheelchair in a nursing home. But after growing up around the racetrack, he finds it perhaps even harder to be distant from his life’s passion. However, thanks to the Twilight Wish Foundation, he was able to return to the New Hampshire Motor Speedway for just one more day.

Friends Young hadn’t seen in years thronged around him as he toured the track and visited the pit, watching from the front line as the race roared to a start. The cars were so close he could have touched them.

“When I sat there and heard the engines begin to vibrate, that made me cry because that’s in my blood. I was crying, I’ll tell you … I wouldn’t trade it for anything I’ve had this year,” Young declared.

If you or someone you know has a dream that hasn’t been realized, consider submitting an application.

Twilight Wish Foundation depends on the generosity of others. Volunteers and donations are appreciated. Even with today’s exorbitant operating costs, the charity is able to devote 77 cents of each dollar directly toward wishes. 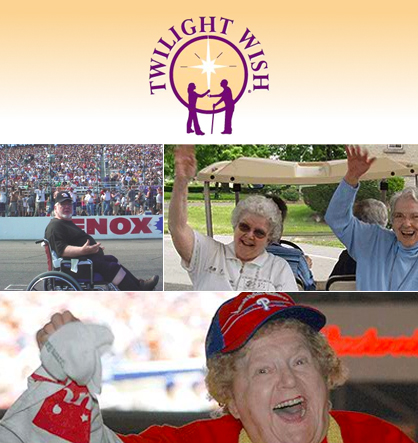