Hermes Returns To Its Equestrian Roots

As a long standing equine lover, I was delighted Hermès International announced it would once again embrace its equestrian heritage and align its brand with equestrian games and sports.

Hermès, a brand that holds a solid foundation in equestrian chic style, is returning to its equestrian roots with a horse competition at the Grand Palais. The competition, Saut Hermès, will take place April 3-4, 2010 and celebrates the sporting, artistic and cultural aspects of the equestrian world.

According to the Grand Palais, the first show jump was held in 1901. The competitions, held each spring, subsequently became an annual highlight for the equestrian community, as professionals and amateurs alike came to admire harnessed teams, thoroughbreds, and the skill of the riders. The event drew all of the fashionable youth of Paris and explains why the name “paddock” is still used for the vast area facing the Great Staircase.

With the growing popularity of the motor car, horse shows fell out of favour, but the Grand Palais is about to turn the clock back and stage equestrian sport for the first time since 1957.

“The two-day event promises to be outstanding”, say show officials, “with five-star international show jumping competition and exciting equestrian demonstrations and parades in the Nave”.

Hermès has become involved with Galop Hermès, a horse race held every summer in Deauville, as well as with international dressage competition Equita’Lyon, held in Lyon.

Hope to see you in France! 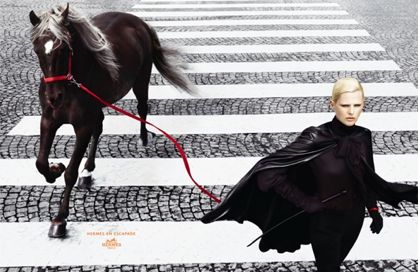