The Secrets of Creating Chemistry

If you meet a guy and don’t feel an instant spark, is it possible to create chemistry?

Some experts say yes. You can meet a great guy who treats you wonderfully, but doesn’t do it for you chemistry-wise in the first few dates, and have it eventually turn around to where you can’t wait to get him alone in the boudoir. This can happen because you truly get to know him and appreciate his better qualities, or because you start to overlook his physical appearance.

Whatever the reason, it is possible to grow chemistry if physical appearance isn't necessarily your priority. 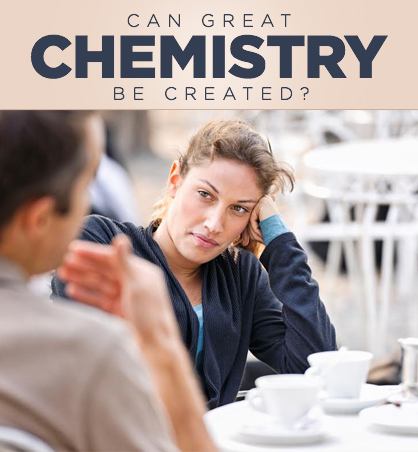 It’s becoming more common for men and women to spend time with someone whose personality they love and become physically attracted with time.

“Over time the little things that were not attractive suddenly become less obvious and actually become more endearing,” said Andrea Adams-Miller, a relationship consultant and CEO of IgniteYourRelationships.com.

For instance, sometimes the guy you originally found chubby, becomes appealing with a Buddha belly. “The connection of opposites also increases with time as the couples tend to balance themselves,” she said.

But can you create the chemistry? Adams-Miller says yes. “If the woman or man interested in the other party for their personality needs a boost in the physical attraction department, they can boost their attraction to the other by integrating in a gratitude journal. When you focus on the positive, the other things tend to wane.”

Your ability to create chemistry with a guy depends on how important physical looks are to you, said Sarah Jones, founder and CEO of Introverted Alpha.

“For some women, looks and physical attraction are extremely important. In that case, she should never pursue someone she's not attracted to just because he looks good on paper. He will never become super-hot to her. He can become good-looking, but it will never be quite what she wanted,” Jones said. “On the other hand, some women don't care that much about looks. For these women, attraction naturally develops over time, and they may even prefer it that way. It's important for women to know themselves and their preferences. When they do, the solutions to situations like this become pressure-free and self-evident.”

Sometimes you can create chemistry with a guy you like but you’re not instantly attracted to, according to Wendy Newman, author of 121 First Dates: How to Succeed at Online Dating, Fall in Love, and Live Happily Ever After (really!).

“My recommendation is if you like him, respect who he is, find him fun to be with, and he treats you well then give him three dates to see if attraction kicks in. Trust your gut. Your gut will know,” Newman said.

“What's a tragedy is when a woman gives a man a chance for chemistry to form, and it doesn't. But she likes him, and he falls for her. The pressure to stay with him because of his attraction for her is intense. Add to that the peer pressure of girlfriends saying, ‘He treats you like a queen, you should stay,’ and you've got the makings of a long, drawn-out, unfulfilling relationship,” she said.

Trisha Trixie shares her story of how she met her fiancée. At first, she said, “I was not really physically attracted to him. However, over time, being friends, hanging out, doing things together, I found we had much in common and the more we hung around the more I liked him. One day it just seems like it happened. I looked over and thought, ‘Wow, he sure is sexy,’ and then I shook my head thinking, ‘What did I just say?’

“I realized that by getting to know him and finding our commonalities, we grew on each other. I think if you open yourself up and give yourself a chance, maybe date outside your type (which he is) and knock down that physically attracted barrier, you will find a more meaningful companion and someone that you will always find sexy,” Trixie said.