“If I could do one thing as a dictionary evangelist, I'd encourage everyone to have more fun with their language. Words exist to be used. Don't be afraid to use an unusual word or even create a new one!” said the former editor-in-chief of the second edition of the New Oxford American dictionary.

Having fallen in love with words at an early age, working at a dictionary seemed like a good option. But now, she is on to bigger and better things with Wordnik, a website that bills itself as “a new way to discover meaning.”

By displaying definitions from a variety of sources, users can see different takes on a word’s meaning. Each word is also explicated by multiple real examples drawn from books, major news media, blogs and more. The examples are listed by usefulness in helping visitors understand how words operate in different contexts.

“Wordnik is a great place to satisfy your curiosity about words and to interact with other word-lovers,” McKean said. “Don't be satisfied with flat, dull, ordinary definitions, where words are like zoo animals in cages. See them as they really are.”

Users may add comments, explaining their opinions on whether a word is useful or useless, pretty or ugly, and silly or serious. The site also boasts more than 30,000 lists, many made by users.

Frustrated with all the energy spent trying to cram words into a paperback book, going online seemed the perfect solution.

“I hated not being able to include all the words, so we started Wordnik to give them all a home. But I also wanted Wordnik to be a place where you could jump from a word to all sorts of cool discoveries related to it,” McKean maintained.

At age 8, after reading an article in the Wall Street Journal suggesting that making lists of words could be a real job, there was no turning back for her. Today, she is still enchanted by the possibilities of words.

“I love that every single word is potentially a door to a new idea,” McKean declared. “When you learn the word ‘aftercrimes’ (when there's a series of subsequent smaller crimes in the same neighborhood as a big crime) or ‘greynet’ (the programs workers install on their computers that their employers didn't authorize or don't know about) or ‘sneezer’ (someone who enthusiastically ‘spreads’ promotional videos or other content online), they open up new views on things you might not have even thought about before.”

According to McKean, some words have fascinating histories. Scofflaw, for example, was created in a contest back in 1923, when a Prohibition supporter tried to invent a word to describe people who still drank alcohol despite it being illegal. And poodle, for instance, comes from the German word meaning “puddle.”

“Sadly, most words have pretty boring histories,” McKean explained. “They're like people, in that not everyone is descended from a king or a famous criminal. Lots of ordinary words for ordinary things have ordinary histories – but that doesn't mean they aren't useful, fun or interesting.”

After years of work in the industry, McKean is among those few that find themselves using a dictionary multiple times per day.

“Of course, now with Wordnik, I'm not really looking things up to see what they mean, as much as I am adding words to my lists, having conversations with people about words, or checking out what articles the example sentences link me to,” she said.

And she still claims to be bad at Scrabble?

Check it out at www.wordnik.com. 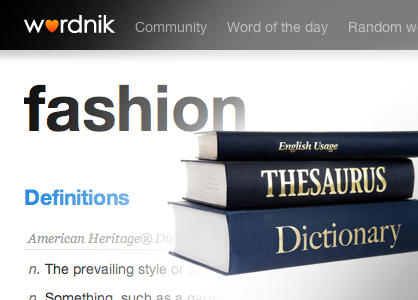